The easiest Canele Recipe without rum for the notoriously difficult pastry to achieve! These French Canelés de Bordeaux have been an obsession of mine for a few years now. Nothing compares to their dark caramelised crust and incredibly moist middle! Our version of the small french pastries is made in silicone moulds, without beeswax or expensive copper moulds!

As an Amazon Associate I earn from qualifying purchases, at no extra cost for you! Thank you!

Ever since I tasted my first Canelé from a small French patisserie, I was on a mission to develop the best (but easy enough) Canelé recipe, so I can enjoy them anytime I wanted. I was reluctant to invest in propper copper moulds, and was adamant that Caneles made in silicone ones can be just as delicious! A few years later, I am finally ready to share my recipe for Caneles without Rum, Beeswax or copper moulds. All you are going to need are typical kitchen tools, and one of these Lékué 8 Cavity Gourmet Cannele Bordelais Moulds.

You can use either silicone or copper moulds for this recipe. Although many claim that Canelés can only be made crunchy and caramelised in copper using beeswax, I disagree. I personally use a silicone mould that is 8 x 70ml capacity and is great for the quantities in this recipe. My crusts are just as dark, caramelised and crispy. The beauty of a silicone mould is that your Canelés never stick and you can wash them in your dishwasher. Not to mention it is A LOT cheaper than copper moulds.

How To Make The Best Canelés?

I highly recommend using whole milk and 100% butter in this Canelé recipe as the fat content in the milk really helps to keep these pastries moist during lengthy baking. Pour your milk into a pan, add the butter and vanilla paste (I use Neilsen Massey)/ split the vanilla pod and heat gently just until the butter melts. Do not let it boil.

In the meantime, whisk an egg and an egg yolk together with caster sugar. Caster sugar has smaller finer grains compared to granulated sugar and, therefore, dissolves easier and makes your Canelés de Bordeaux lighter. Once your eggs and sugar are pale and fluffy, sift in the flour and beat together.

For this Canelé recipe, I tend to do everything in a measuring jug, because it then allows me to pour the mixture into the moulds easier (and saves washing up).

The next step is important. Before you pour your buttery milk into the eggs, make sure it’s not too hot. Otherwise, your egg mixture will scramble. Have a whisk handy and as soon as you pour your milk in, whisk vigorously to avoid scrambling or any lumps forming. The mix will be quite thin – it’s supposed to be that way.

That’s it, the batter for the Canele without Rum is done! Now, just a bit of patience…

Cover your bowl (or measuring jug with cling film and put it in the fridge for at least 24 hours (up to 56 hours). The texture will not be the same without giving the Canelé batter this time, so patience pays off here.

When you’re ready to bake, heat the oven to 230 C Fan and take your batter out of the fridge. Your mix will have a thick layer formed on top, so whisk it together again to make it of even consistency. When the oven reaches the temperature, pour your Canelé mix into the mould leaving some space for them to rise. Since I use a “floppy” silicone mould, I tend to fill them halfway and put them in the oven. Then top them up to avoid any spillage. Alternatively, you may want to use a tray underneath the silicone mould, but make sure it’s hot before putting the moulds on top, or your canelés won’t have crispy tops.

Don’t fill your mould before your oven preheats, as the flour will rise to the top again and your Canelés will be uneven consistency when baked.

Bake at a high temperature (230° C) for 10 minutes, then reduce the temperature to 180° C and bake for a further 45 minutes. No matter how tempting, don’t open the oven for the first 40 minutes.

Your Canelés de Bordeaux will be dark in colour, crispy to touch and puffed up slightly when you take them out of the oven. Leave them in the moulds for at least 10 minutes before you attempt to remove them. Just flip them upside down onto a large chopping board. Then transfer onto a cooling rack to cool completely.

Make sure you let them cool completely before you eat them (I personally find this a huge challenge). They will firm up and won’t feel doughy in the middle. Canelés are best enjoyed with a cup of tea or coffee!

Have an Egg White Leftover After Making Canelés?

If you made this lovely French Canelé Recipe without Rum, you may have one egg white left. Why not try one of our other recipes to it up: 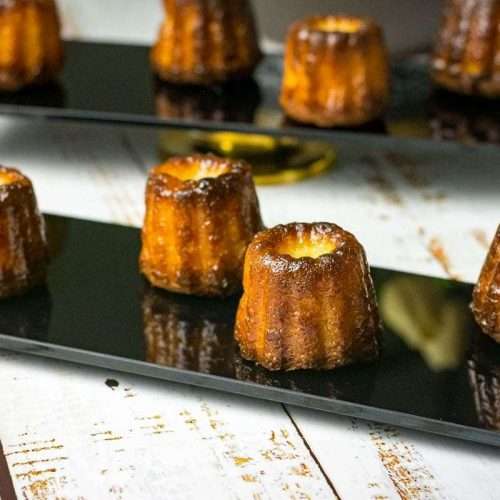 These Caneles without Rum are best served on the day that they are baked. Store any leftovers in an airtight container at room temperature. 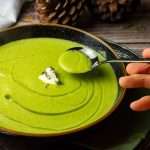 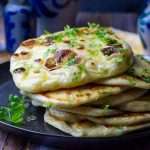 Hi, I am Ieva - the face behind this blog. I live in North Wales with my husband Seb and our Golden Retriever Sawyer. It's safe to say that I live and breathe food: from researching and reading about food to creating new recipes and growing my own vegetables to use in my cooking.  The great thing is, Seb appreciates all the good meals that are also essential at his worst 'hangry' moments! Somebody HAS to feed Seb... MORE ABOUT ME>>