When it’s looking dire in the fridge and a desperate need for cake is taking over, some people resort to making a simple Victoria Sponge or Vanilla Cupcakes. My ‘day-before-a-food-shop’ saviour is this amazingly simple Apple Crumble Traybake.

It sounds like a cliché amongst food bloggers, but this is exactly how my Mum used to make it. Joke! My mum rarely bakes (although she does make the best honey cake in the world – I’ll ask her to share the recipe soon). But this Apple Crumble Traybake certainly reminds me of the one she used to buy in a local bakery and bring home for an after-dinner treat 🙂 I am very thankful to my parents for inflicting an incredible love for ‘baked goods’ from an early age. Not necessarily home-baked cakes, but great cakes nonetheless. In my family, you haven’t eaten, unless you had a dessert. Over the years it’s become both a blessing and a curse!

Preheat the oven to 180°C Fan. Line your oven dish with baking parchment: both the bottom and the sides. It will be easier to lift the Apple Crumble Traybake out of the dish once it’s cooked if your baking paper is left overhanging the sides.

In a large mixing bowl, mix flour and baking powder. Cube your room temperature butter. Then rub the butter in the flour with your fingertips until there aren’t any large lumps of butter left. Add sugar and cinnamon and mix. Crack an egg in and knead lightly with your hands until some larger clumps of dough form.

Divide the mixture into two. Tip one half into a lined baking tray and press hard with the palm of your hand to evenly cover the surface of the tray. Spread any jam you have at home on top. I love pairing my apples with our home-made plum jam, but cherry or raspberry jam will work just fine.

I use whatever apples I have at home. But I find this traybake works best with tart apple varieties, like Granny Smith, Braeburn or Jazz. However, avoid cooking apples as they go to complete mush. Core your apples. Peel them if their skins are tough, but I rarely do that. Skins soften whilst baking and I hardly notice they are there. Slice your apples very thinly. After that, squeeze some lemon juice over them to prevent from browning.

Layer your apple slices on top of the jam, sprinkling with a tbsp of sugar in between layers. Keep on layering until you have no apples left. I normally get 3 layers. Then evenly spread the rest of the crumble mixture, and only very lightly press down to stick the crumbs to the apples.

This Apple Crumble Traybake will take 40 minutes to cook at 180°C Fan. The top will turn lovely golden brown. Cool it in the baking tray, then lift it out and slice into squares. Enjoy with a cup of tea or coffee!

We bake often and make a huge variety of lovely sweet treats. Cakes, tarts, cookies and biscuits – you name it! Have a look at our other recipes:

For the Apple Layer: 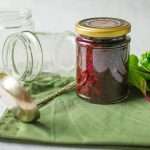 This website uses cookies to improve your experience while you navigate through the website. Out of these, the cookies that are categorized as necessary are stored on your browser as they are essential for the working of basic functionalities of the website. We also use third-party cookies that help us analyze and understand how you use this website. These cookies will be stored in your browser only with your consent. You also have the option to opt-out of these cookies. But opting out of some of these cookies may affect your browsing experience.
Necessary Always Enabled
Necessary cookies are absolutely essential for the website to function properly. This category only includes cookies that ensures basic functionalities and security features of the website. These cookies do not store any personal information.
Non-necessary
Any cookies that may not be particularly necessary for the website to function and is used specifically to collect user personal data via analytics, ads, other embedded contents are termed as non-necessary cookies. It is mandatory to procure user consent prior to running these cookies on your website.
SAVE & ACCEPT
Somebody Feed Seb